Although the business models of national operators and local commercial operators providing connectivity are fairly well understood, less is known about local social-purpose operators and their role in providing affordable access to communication in places where the commercial operators see no interest. Among them, a number of community-owned networks have demonstrated their ability to contribute to closing the rural access gap. This is being increasingly recognised in the outcomes of many international fora on connectivity gaps, as shown in the The Role of International Organisations section of the wiki.

There are a variety of barriers that local social-purpose operators face because most regulatory frameworks have been designed primarily to cater for national operators deploying their own infrastructure. This wiki presents an analysis of solutions that have been implemented by regulators worldwide to address the key barriers faced by local operators, grouped in the following categories:

Regulatory interventions identified in these five areas are making it more possible for local operators to provide coverage in places where there was none, as well as considerably more affordable telecommunication services in areas where users do not have the disposable income to afford the data packages available from national operators.

Based on this evidence, this paper concludes with a set of recommendations for regulators wishing to create a more enabling environment for local operators by replicating and localizing the best practices included in this document.

A more inclusive telecommunications ecosystem can be achieved through the creation of a tiered licensing framework that caters for the needs of operators of all sizes. Such a framework would include categories for local commercial operators and SMEs, which would be associated with a more modest fee structure and lower administrative burden. Additional exemptions may be extended to local social-purpose operators and those wishing to provide affordable access in localized geographical areas and communities and on a not-for-profit basis.

Below there is a summary of the major challenges identified, the proposed solutions, and the countries where they have been implemented.

Provision of affordable connectivity to the half of the world that still lacks access to the internet will mostly take place via wireless networks. As a result, the regulation of access to spectrum is a critical issue. Although there are innovations in spectrum management taking place around the world1), adoption of these innovations has not kept pace with the growing need for affordable access solutions to create a more inclusive internet.

In terms of ensuring that all citizens are within reach of a wireless signal, regulatory challenges regarding spectrum are related to the development of innovative mechanisms to allow access to spectrum in fair terms for those operators willing to attend uncovered areas. Countries have developed different approaches summarized in the following table.

Due to the potential for interference when two operators use the same frequency, the use of most radio spectrum requires a license. However, the rapid spread of license-exempt spectrum use in the form of WiFi, the technology of choice for many local operators, is an important lesson about the power of frictionless innovation and about the pent-up demand for affordable internet access. It makes sense for regulators to leverage this success by expanding access to license-exempt spectrum and further reducing costs and bureaucracy associated with its use. In addition to the traditional WiFi bands in 2.4 and 5 GHz, some countries are incorporating new license-exempt bands in their Radio Frequency Plans, such as 6, 24 and 60 GHz. The Federal Communications Commission in the U.S.A. is leading the way in substantially expanding frequencies license-exempt use11).

While demand for spectrum for International Mobile Telephony (IMT) often exceeds the pace at which regulators are able to make it available in urban areas, large amounts of licensed spectrum lie unused in sparsely-populated, economically poor regions. For example, the purple circles in the figure below shows the regions in Nigeria where LTE mobile network operators are providing coverage12). The map also displays population distribution data based on the High Resolution Settlement Layer (HRSL) data research by the Earth Institute13). As can be seen, the total coverage of the land area and populations within the LTE signal footprint is still relatively small. For illustration, the blue circle with the pop-up dialogue within the image, which has a radius of 10 km, contains nearly 50,000 people living where none of the LTE operators in the country are using their spectrum. 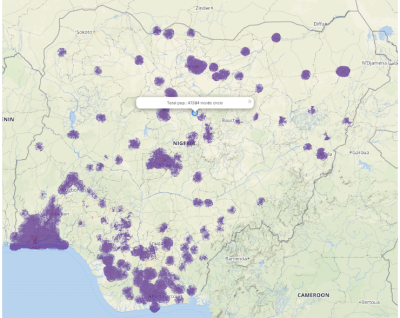 There is an opportunity for innovative approaches to reuse this spectrum to provide affordable access for all. As indicated in the section above, a variety of low-cost IMT base station manufacturers have emerged in recent years that offer the potential to dramatically change the cost model for sustainable rural mobile network deployment. Incumbent operators may not see sufficient return on investment to justify the roll-out of these new technologies. Yet, because regulation focuses on national operators, local operators, who do have that potential, are currently excluded from access to the radio spectrum required to deploy networks that could directly reach handsets already available in these areas. To address the under-use of assigned spectrum in rural areas, a strategy is needed to enable sharing of unused IMT spectrum that has already been assigned to a primary licensee. In addition to this, in many countries, there are still many blocks of IMT spectrum that remain unassigned. Evidence has shown that when IMT spectrum set-asides for social use of this bands are created, such as the case of Mexico, local social-purpose operators provide affordable mobile services in places of little economic interest to national operators. Regulators aiming to address digital exclusion may want to consider setting aside small spectrum blocks of IMT spectrum for local operators wishing to provide affordable connectivity in underserviced areas. Similarly, they may consider use-it-or-share-it provisions when preparing new IMT spectrum bands for allocation and assignment. Alternatively, an effective strategy may be to allocate this new spectrum to smaller regions than nationally, or to allocate IMT spectrum dynamically on a secondary-use shared basis to prevent it lying unused where the need for affordable access solutions is greatest. Countries such as the United Kingdom have already pioneered these approaches.

The reduced interference from antennas designed for Point to Point (PtP) links that can focus wireless communication along very narrow beams/paths has also led some regulators to extend the use of bands traditionally assigned for satellite services, for PtP backhaul links. Additionally, powerful, low-cost microwave technology pioneered by WiFi manufacturers can be used in almost any frequency band. Some countries are benefiting from the market availability of low-cost microwave solutions in 11GHz and other frequencies, and have adapted the regulations to encourage their uptake. This has taken the form of a light-licensing scenario such as is operated in the United States and in New Zealand for the cooperative assignment of geo-located frequency assignments.

The high cost of exclusive-use spectrum licenses, particularly through spectrum auctions, stands in stark contrast to license-exempt spectrum that is available at no cost. Dynamic spectrum management, which assigns spectrum on an on-demand basis, offers the opportunity to establish a middle ground between both approaches. While TV White Space (TVWS) regulation has been implemented in the United States, the United Kingdom, and Singapore, its real potential may yet to be realised as an affordable access technology in developing countries where spectrum in the UHF band is largely unoccupied, especially in rural areas. In the Global South, Colombia, Mozambique, and South Africa are pioneers in this regard, having recently introduced TVWS regulatory frameworks aimed at exploiting the technology for addressing digital exclusion.

Spectrum usage fee calculations vary from country to country. In most cases it is determined by a formula that considers a combination of parameters, including size of the spectrum block being assigned, the centre frequency (value of that particular spectrum band), and the type of application (point to point - backhaul - vs access). Some countries have come up with more innovative formulas that make more fine-grained calculations, with parameters such as the size of the area being covered, and whether the area is urban or rural or whether the spectrum is shared. This allows the same formula to generate modest fees for a small, rural, local network, while, while exclusive, national use of spectrum would entail sums of the order of magnitude that national governments would like to see collected from the telecommunications industry.

One of the main barriers to the adoption of an enabling regulatory framework for local operators is that few people know they even exist. This applies not only to the rural communities that are most likely to benefit, but also to policy makers and regulators, and development organisations. Lack of awareness is compounded by the view among most policy makers and funders that access markets can be sufficiently well-served by a handful of large (multi)national operators competing to provide services of sufficient coverage and quality, and at an affordable price. However, there is an increasing body of experience that indicates that support expanding the telecommunications operator ecosystem to include local operators.

In addition some countries include in their policy documents references to community networks, small operators and co-operatives as a vehicle for digital inclusion. Among them, Kenya and South Africa. Kenya highlights the need to provide for enabling policy and regulatory framework for community-based operators in their National Broadband Strategy. South Africa not only mentions them in their National Broadband Plan, and includes them as part of the Telecommunications Value Chain in their SMME Strategy, but the development and promotion of “SMMEs and cooperatives” is part of the objects of the Electronic Communications Act, the main act of the telecommunications sector in the country. In the particular case of community networks, specific support for their development was articulated in the Budget Speech 2018 from the Department of Telecommunications and Postal Services. Unsurprisingly, South Africa is the country in Africa with the most local operators in Africa.

In the Americas region, during the last few years, Brazil has implemented a strong policy and regulatory strategy for facilitating the participation of small operators in serving rural and remote areas, including a recent note on how to regulate community networks. In Mexico, community and indigenous operators are specifically recognized in the Telecommunications Act, and it specifies that spectrum planning activities should always take into consideration the specific needs of these operators. Mexico’s new Social Coverage Program specifically refers to them as an important allies in addressing unconnected areas.

Data Enquiry - Competition Commission South Africa 201927). Many references to community networks in the entire network, and a particular recommendation in page 32